Return to Our Dental Practice

Our Doctors and Team

Dr. Mandras grew up in Owings Mills and completed his pre-dental requirements in the College of Life Sciences at the University of Maryland, College Park and continued right into dental school at the Baltimore College of Dental Surgery where he earned his D.D.S degree. Dr. Mandras was accepted into a prestigious general dentistry residency at the Bay Pines VA Hospital in St. Petersburg, Florida where he focused his time on advanced prosthetic and restorative procedures. Dr. Mandras is currently taking advanced dental courses at the Pankey Institute.

Over the past few years, Dr. Mandras has practiced comprehensive care dentistry in Baltimore, Prince Georges and Howard counties. He is a kind and caring practitioner who considers his patients well-being as his top priority. Dr. Mandras strives for perfection and he ensures that his patients are satisfied and comfortable with his treatment. Dr. Mandras has a great disposition for a dentist, he is gentle and compassionate and makes all attempts to accommodate on and off hour emergencies and stay on schedule as he values his patients time. He enjoys all facets of dentistry. His training encompasses patients of all ages including children and he is particularly efficient and successful with the most challenging of procedures including root canals, extractions, crown and bridge, whitening, Invisalign, implants, veneers, fillings, onlays/inlays, and periodontal treatment.

Understanding that most dental patients like to be treated under one roof, Dr. Mandras’s practice will be broad spectrum and cater to his patient’s needs. His philosophy is to treat others the way you would want to be treated. That directly translates to the high quality of his dentistry. Every patient in the office is treated equally, as if they were his family members. After meeting Dr. Mandras for the first time you will realize he is very honest and you will be able to trust he is looking out for your best interest. The doctor brings a light-hearted humor to the office that could make any patient comfortable while in the chair. His main goals for his patients are complete oral health, beautiful cosmetic smiles, and prevention of dental emergencies.

For more than 20 years, Dr. James Taneyhill has offered superior quality dentistry to the community of Bel Air, Maryland. Dr. Taneyhill is a Fellow of the Academy of General Dentistry, a rare distinction achieved by less than three percent of dentists nationwide, and has been inducted as a Fellow of the International College of Dentists. Dr. Taneyhill is also an instructor at the VA Medical Center in Baltimore, where he teaches restorative dentistry and esthetics to dental residents.

Dr. Taneyhill was raised in the Rodger’s Forge section of Baltimore County. He attended Loyola High School (Class of 1965) and Loyola College (Class of 1969). He then served in the army as a helicopter pilot for four years, including one year in Vietnam.

After leaving active duty in 1973, Dr. Taneyhill continued to serve in the Maryland Army National Guard. In 1999, he retired at the rank of Colonel after 30 years of service in the guard. He was a Master Army Aviator and has been awarded the Legions of Merit and the Bronze Star, among many other commendations.

Dr. Taneyhill graduated from the University of Maryland Dental School in 1980 as one of only 10 students selected to participate in an accelerated program. The program resulted in the awarding of a Doctor of Dental Surgery Degree in three years rather than four. He then served a one-year Dental General Practice residency at the Veterans’ Administration Medical Center in Baltimore before entering full-time private practice in Bel Air in 1981.

As part of his commitment to continuing education and excellence, Dr. Taneyhill maintains active involvement in the dental community through professional memberships and post-graduate studies. His professional affiliations include membership in the:

Dr. Taneyhill has spent a lifetime in continuing dental education. He averages 100 hours of continuing dental education studies every year. He is an alumnus of the Center for Professional Development in Scottsdale, Arizona, and a graduate of the prestigious L.D. Pankey Institute for Advanced Dental Education in Florida, America’s premier center for post-graduate studies in dentistry.

In his free time, Dr. Taneyhill enjoys sailing the Chesapeake Bay with his wife, Karen, a Baltimore County special education department chairman, and his three children, Katie, Joe, and Philip. Since retiring from the Army National Guard, Dr. Taneyhill has volunteered at a dental clinic in Haiti at least one week each year, helping the poorest children and families.

Dr. Taneyhill received a Distinguished Service Award on March 30, 2016 at Morgan State University. Taneyhill established a pro bono clinic in 2012 at Our Daily Bread for the men in its Christopher Place Employment Academy. 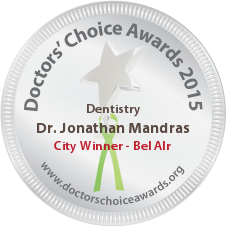 "I would love to take this opportunity to share the wonderful experience I had while receiving the Invisalign treatment at the office of Dr. Mandras. After many years of being completely unhappy with my smile, I finally reached a point in my life were I wanted to address the gap in my front teeth. I was so warmly greeted on the phone by Judy that I immediately made an appointment. Dr. Mandras confirmed that I was a candidate for Invisalign and in less than 6 months I have a smile that makes me happy and confident. I am no longer self conscious of the way that my teeth look and the entire experience was worth every penny.

Dr. Mandras and his staff have been so kind and I am so happy with my treatment that I am now joining the practice for my regular dental check-ups! I cannot express enough how elated I am with the end result and more importantly, I have found a dental practice where the patient is treated with so much kindness and respect." JE, Forest Hill

"Unlike some, I do not have a regular dentist. I spend a great deal of my time traveling and very rarely see the same dentist twice. Needless to say I have seen both good and bad dentist. The staff were some of the most friendly people I have ever encountered in any dentist office. Their office was pristine and the equipment they used looked state of the art. I was very impressed and I will gladly see this dentist again." Richard G.
•     •     •     •     •

"The best decision I ever made! The best dentist I've ever seen, no wait, beautiful clean office, extremely friendly and knowledgable staff. This office is fantastic!" CS, Bel Air

"Excellent doctor, staff and office. I need a lot of dental work and the experience could not have been better. Everyone was so friendly and welcoming, the office is beautiful and my teeth are perfect." ratemds.com

"This office is the best! They are all so friendly and welcoming and the doctor is very good. The office is beautiful. It is comfortable and relaxing. They offer everything from massage pad chairs, warming hand mitts with lotion, even jewelry cleaning and face towels. Every time I come into the office everyone says hi to me by name. It is the best office I have ever been in, not just dentist but every office I have ever been in." smithkcf